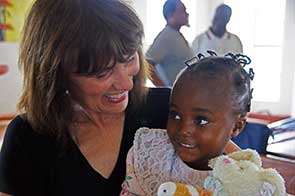 Many of us are searching diligently to find some connection to a greater calling at work. It’s an age-old existential quandary as overwhelming for a college freshman trying to choose a major as it is for those of us at the height of our corporate careers. What are you meant to do with your life? What career should you choose?

The Greek philosopher Aristotle described vocation, or this idea of greater purpose related to career this way,

“Where the needs of the world and your talents cross, there lies your vocation.”

Dr. Sherri Kirkpatrick, Co-Founder of HealthEd Connect, an NGO that empowers women and children through evidence-based health, education, and advocacy programs in Nepal, Malawi, Zambia, and the DR Congo seems to agree.

After a decades-long career at Graceland University where she founded an online school of nursing, executed a $35 million-dollar capital campaign a year ahead of schedule, and directed village health care programs in developing countries around the world, the pieces came together.

She and her husband Jac retired from “regular” jobs and partnered on an ambitious plan to organize their own NGO focused on a truly unique approach to empowering change. When she began to tell the story of how the dots connected for her, she recounted a conversation with Dr. John Sellars, the then president at Graceland University.

“He said something that felt very true for me. He said, ‘It’s like your entire life has been a dress rehearsal for this.’ He was right. That’s exactly what it felt like.”

Sherri had always been drawn to care for others. When she considered what ignited her passion to launch HeathEd Connect, however, everything connected back to three eye-opening relationships with children from Mexico awaiting special surgeries in the U.S.

Seeing Reality through the Eyes of a Child

“Jac was working at NASA and attending Stanford University. We knew about a program that brought children to the U.S from Mexico for special surgeries and decided to become foster parents. I knew after this I really wanted to do something with an international focus.”

It was clear as she cared for her foster children that their physical health was only one piece of the puzzle. She knew these girls would be going back to a social and economic situation that would be nearly impossible to overcome.

Later, in Haiti, Sherri was finishing a PhD while completely immersed in local culture. As she led village health workers in delivering basic health education she had another important revelation.

“I realized the women serving as village health workers were really the unsung heroes. They had the resilience, the optimism, and had all the potential to become the cornerstone of change.”

This realization and the relationships developed in the village were key in how HealthEd connect would model all future projects. Their NGO would be built on the idea that inspiring sustainable holistic change meant mirroring the lessons learned from her three Mexican foster children and the village health workers in Haiti.

Moving Forward with the Heart of a Learner

As a true academic, Sherri considered the feasibility of launching an NGO by doing extensive research and asking a lot of questions. Her experience as a foster mom made her especially passionate about building support systems to care for the needs of orphans. Her experiences with Village Health Workers led her to understand doing this effectively meant connecting with and advocating for women.

By putting local women in the driver’s seat of change, the neediest children could receive assistance. At the same time, women would be developed as leaders with the skills required to sustain and evolve each program to address the most pressing needs.

After learning that one in ten people in Zambia are orphans, Sherri and Jac decided to target their first project here. They conducted online research, they emailed people, and discovered Botswana had more programs focused on the orphan population than any other country in Africa. Since this seemed the place where they could learn the most, they scheduled a trip to Botswana to meet with leaders to gain an insider perspective regarding what worked well, and what wasn’t sustainable.

They made great friends, connected with passionate people, and came away understanding that while Botswana was handling the orphan problem with orphanages, the number of orphans in Zambia prevented a similar approach. Orphanages were expensive, dependent on administrators to run them, and space for children would always be limited.

“This kind of structure just couldn’t be sustainable in Zambia. They have 1.4 million orphans there. The program would have collapsed under the sheer weight of the logistical demands of running it.”

Instead, Sherri and Jac decided to focus on grandmothers and other local women that had already taken in an orphan.

“We saw many orphans in Botswana who had no sense of family, they were cut off from their roots. We wanted to find a way to help grandmothers in Zambia by providing the support they needed to keep the children with them.”

But what was the most pressing need? Rather than make an assumption, she wanted to involve the community by asking first. With a partnership through another non-profit, World Service Corps, she had help in producing and conducting a community survey that ultimately determined what the first priority should be.

“It’s important to note that World Service Corps HELPED. The Village Health Workers we were actually the ones taking the lead on this.”

After visiting 75 homes where a family member was raising an orphan, a consensus was reached. Interestingly, the people did not ask for more food, or shelter, or additional monetary resources of any kind. They craved a better future for the children through access to education.

Wisely, one of the grandmothers in the village summed up what she saw this way,

“Yes, the children are hungry today. But, tomorrow will be like today without education.”

HealthEd Connect executed a successful fundraising campaign and built schools in more than one village.

When the local teachers pointed out it was very difficult to teach hungry children, HealthEd Connect established a hot lunch program.

Soon after, the Health Workers raised the concern that the corn mush staple didn’t offer adequate nutrition. Through a partnership with Sherri’s old employer, Graceland University, HealthEd Connect hosted a team of students that came to establish gardens. While these visitors gained new insight from a tremendous cultural opportunity, the schools also benefited. These gardens now produce enough fresh food to feed children attending each school.

Finally, teachers noticed that despite nutritious food and a safe place to learn, many children were still unable to thrive. They partnered with another program and flew a social worker from the U.S  as “Mama Madam” to train 30 locals to help children with the deep emotional difficulties that come hand-in-hand with orphanhood.

Today, HealthEd Connect operates programs in Nepal, Malawi, the Democratic Republic of Congo, and Zambia. How each program unfolds is as unique as the community itself as Sherri makes this “asking first” idea a big priority.

“The key really is ‘evidence-based.’ We help the Village Health Workers to conduct in-depth needs assessments within the local community to understand the greatest need. They are the bosses.”

How Did She Do It?

She embraced every role from foster mom, to nurse educator and scholar, to higher education professional and development officer. She built a career focused on what she loved—seeing a bigger picture and sharing a story of possibility while staying anchored in authentic relationship.

Despite shifting roles and job titles, the bigger focus remained constant. Each leg of the journey also brought new ideas and skills that armed her with the kind of skills and knowledge needed to later execute a program of this magnitude.

She also tapped her network!

“Don’t forget I was in development before this!”

This web of relationships provided access to in-country support, major donors, on-site volunteers, artists and craftspeople who shared their talents as in-kind donations, and even free office space at Graceland University.

“The people I talk to believe in the work we do. They can see it’s based on a sustainable model and are inspired to do what they can to help.”

What about the Massive Cultural Challenges?

HealthEd connect partners with Community Health Workers who are already involved in addressing the special needs of their communities. They empower these women to take an active role in creating the programs most needed. In the process, community chiefs and other local volunteers step up to take a role in many of the programs that unfold.

What Advice would She Have for Others?

“Research! Ask everyone, get online! Go there and talk to people already doing something similar!”

She also had sage advice about the selection of a Board of Directors.

“We went after the best of the best.”

What is it Like Working with Her Co-Founder and Husband?

“It’s wonderful. We’re different but complimentary. While I’m more relational, he has that engineer’s mind. He sees the details and manages all the logistics. When we have to go somewhere, he’s the one that figures out the safest and most efficient way to do that.”

For more information about how you can help HealthEd Connect Village Workers in Zambia transform their communities through health, education, and advocacy click here.