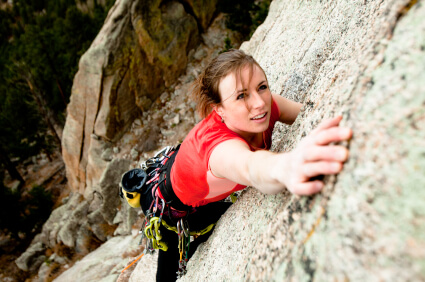 Did you ever have a house or car door lock rust itself shut, so you had to run out and buy a can of WD-40 to get it to un-stick?

You need to be as tenacious as that rust inside the lock. But like that can of America’s favorite rust remover, you also need to look at the can to remember that it derives its name from the fact that it took 40 tries to get the formula just right. If the chemist who developed it in the 1950s just completely gave up, perhaps we never would’ve experienced simple and inexpensive rust removal in our lifetimes (or not until computers became small enough to fit in our pockets.)

You may get lucky in that it won’t take 40 tries to get to where you want to be. But you need to develop the pure grit necessary to try several times, maybe even more: it’s possible that’s why so many software packages have the number 500 or 1,000 in them!

Gaining the Ability to Bounce Back

Failure and rejection are hurtful. Half the time, it’s not taking a leap of faith that’s holding you back but rather the fear of those things. Have you ever decided not to apply for a job because you didn’t feel confident you met all of the qualifications? (Even though men frequently do this despite meeting only 60% of them?) Or not bothered to ask out someone you found attractive, thinking they were out of your league?

Facing repetitive rejection can feel demoralizing. So can something you believe in not turning out the way you wanted it to. But the fact that you TRIED counts as something.

You get the ability to bounce back when you start to separate yourself from the rejections and failures: that you are not a moral failure just because a business plan didn’t work, you didn’t get that dream job, or got a flat “no” from a prospective date. A failure is actually a new beginning. A sign that you need to take a different approach.

Keep Your Eye on the Prize

You have to stay focused and motivated on what you want. Work towards this goal every day. But when keeping your eye on the prize, it can seem intimidating. If your goal is to write a manuscript, penning about 200,000 words sounds like something you may never find the time to do and this causes people to just give up.

But if you write just a few sentences a day, soon you’ll have a paragraph. Several paragraphs will make a chapter. Enough chapters complete that manuscript.

When you see how much progress you made just getting things done gradually, it helps motivate you to put aside more time and resources to reaching your goal whether it’s saving for a major investment in your business or rising up to the challenge of a personal project that’s very important to you.

What else motivates you to get things done? The thought of a better future for you and your family? Financial security? Doing work you find fulfilling? Figure that out and remember it to stay focused.

Complete and Utter Refusal to Give Up

Refusal to give up is the cornerstone of every successful entrepreneur. But it isn’t the same as attempting the same tactics over and over again. If the way you’ve been doing things hasn’t been working, it’s time to try something different. This can mean a different formula, technique, or meeting a different group of people who have new ideas and a fresh set of eyes and ears to give you constructive criticism on what you’ve been doing wrong. Or perhaps the external motivation you may be missing in your life.

No matter how you go about developing grit and a thicker skin, persistence is what leads to success and confidence. In order to truly never give up, you have to separate the falls you take from yourself and think of them as exciting turns in your success story that’s about to be written: after all, an exciting story is one that has conflicts and overcoming them instead of the protagonist just being handed everything or succeeding on the first try!