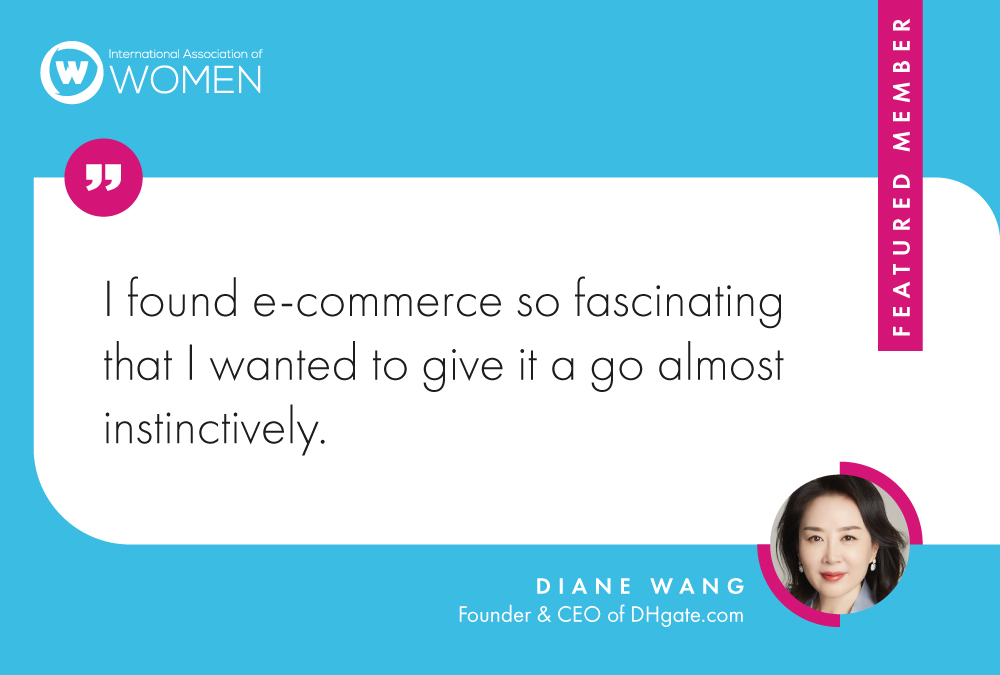 For an amazing role model in e-commerce, look no further than Diane Wang. She has decades of experience as a business owner and industry expert with an impressive resume to show for it. It all started for her after graduating from Tsinghua University. Diane worked for Microsoft as their Marketing Service Manager and Head of Business Development early in her career. Afterward, she landed at Cisco as their Country Marketing Director when they were an “Internet Pioneer” during the late 90s to early 2000s.

It was around that time when Diane and her partners decided to leave Cisco to collaborate on a startup. “When I left Cisco to start my own business, the first problem I encountered was setting up the direction for my start-up. I recall talking to my partners about what we could do to ride on this internet wave” she explained. They eventually settled on the e-commerce industry for their business after weighing their options.

There were two main factors for why they chose e-commerce. “Firstly, portal websites such as SINA and Sohu in China at that time had been so successful we would not benefit from being a follower. Secondly, I wasn’t interested in the travel or gaming industry. On the contrary, I found e-commerce so fascinating that I wanted to give it a go almost instinctively. Even if I haven’t done it before, I wanted to be very true to myself.”

Thus, Diane and her partners created Joyo.com in 1999, a B2C marketplace in China. As their marketplace grew, she asked larger questions of herself and her partners about where they should take their company. Some of those included strategies and areas in the industry they wanted to explore. “These are big questions that I think determine a company’s DNA. And, a business’s DNA is crucial,” said Diane. Soon Joyo.com became the largest B2C marketplace in China and was acquired by Amazon China in 2004.

As one business ended, Diane started another. Founded in 2004, DHgate.com  is the number one cross-border B2B e-commerce marketplace in China. It connects global suppliers to global buyers and, now over a decade old, it has accumulated over twelve million global buyers from 230 countries and regions. Plus, over one million sellers offer forty-plus million products over the site.

Throughout her career, Diane accepted multiple awards including “China Top 10 IT Influential Leaders” in 2010, and was named one of the “Top 25 Most Influential Figures in the Chinese Economy” by Business Weekly in 2009. Along with her awards, Diane holds significant positions in prominent e-commerce organizations. She was appointed as the Chinese member of the Asian-Pacific Economic Cooperation (APEC) Business Advisory Council (ABAC) in 2015, and the Chinese B20 representative in the business sector of G20.

Diane’s passion extends to her love for helping other women succeed as business owners and e-commerce industry experts as well. In 2012, Diane was appointed the Chair of the APEC Women’s Leadership Forum which is in charge of all women-related activities and events. Diane continually empowers women in Small and Medium-sized Enterprises (SMEs) through her volunteer work.

From her expert advice, IAW offers a free resource on how to support women entrepreneurs in e-commerce. If you would like to download it, click the button below:

Part of her path to helping women in business involves her participation in the IAW community. It provided her with a professional community where she could learn from peers and other role models like herself. “It offers us a platform to work together and amplify our influence,” said Diane.

Do you want to network with high-achieving women like Diane? IAW is a  community of professional women who want to expand their horizons just like you. Register for one of our weekly events, find a local chapter near you, or visit our website to sign up today.